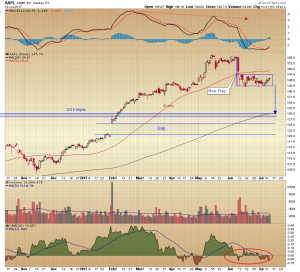 The Technology Select Sector SPDR ETF (XLK) was up 1.3% in Wednesday’s session but the share price of Apple (AAPL) barely moved. That is an unusual divergence because Apple is the top holding in the XLK representing 14.7% of its total assets. The stock has been trading in a narrow horizontal consolidation channel for the last month, which is the potential flag portion of a bearish flag pattern. The pattern price objective targets the current intersection of the rising 200 day moving average and the former 2015 highs, in the $130 area. It remains to be seen, if Apple is preparing for the flag breakdown or building a base to begin the second phase of its prior rally, but the lack of participation in yesterday’s tech move is not a positive sign.