The nearly-200% move in the metals and mining sector that began in early 2016, peaked in February of this year and has been followed by a period of consolidation. This constructive recovery process may be over and the sector may be preparing for the second rally phase.

The SPDR S&P Metals and Mining ETF (XME) highlights the pullback to the 61% Fibonacci retracement level of the September 2016 low and the high in February of this year, and the channel consolidation that followed above this level and below the 38% retracement level. Last week the fund broke above channel resistance at $30.75 and this level should now become a platform that supports a move higher. 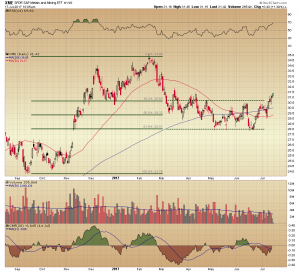 There may be a better way to profit from a rally in the metals and mining space.

Freeport-McMoRan (FCX) has underperformed the XME by 12.5% over the last six months and it is currently breaking above channel resistance of its own. This could be the start of a catch-up move to the rest of sector. 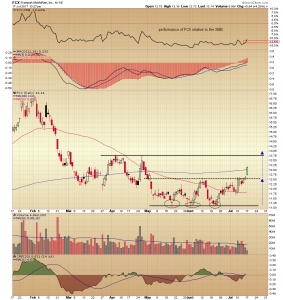 The horizontal channel pattern on this chart is two-tiered — and today the stock is breaking out the lower portion, and retesting its flat 200-day moving average. Its daily moving average convergence/divergence is overlaid on a weekly histogram of the oscillator and is crossed above its mid-line on both timeframes. This signals positive price momentum and short-term trend direction. Chaikin money flow has been sitting at its center-line, but is back above it and its 21-period signal average.