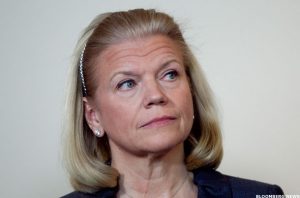 The tech giant reported its 21st straight quarter of year-over-year revenue declines after the market closed, giving investors a case of the “Big Blues.” The company has been attempting to transition from its mainframe business model to other more competitive spaces, including cloud computing services, business analytics, and artificial intelligence applications.

It is a major shift away from its traditional enterprise business, and investors are getting impatient. It’s time for the new strategies to generate returns. 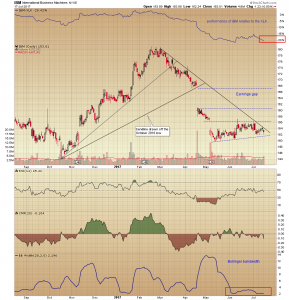 Shares rallied over 25% from their October 2016 low to their high in February of this year, briefly outperforming the Technology Select Sector SPDR ETF (XLK) in that time. A small triple-top formed in the $181 area, however, and the stock price began to retreat, first breaking through the trend line that delineated the October rally, and then breaking below a long-term trend line drawn off the February 2016 low.

Relative performance reversed sharply and the stock is currently lagging the broad technology sector by over 20%. The April gap lower in the stock price followed last quarter’s earnings disappointment and created a large vacuum between the $168 level and $161 level. There was a second down gap in May before the stock found a bottom and moved back up to close the smaller gap, and retest the downtrend line drawn off the February decline.

The narrow range price action over the past month has tightly compressed the Bollinger bands and periods of low volatility are often resolved by periods of high volatility. This means that another earnings disappointment or an earnings surprise could be followed by a volatile move in price.

The relative strength index has been oscillating around its center line, reflecting the lack of price momentum, and Chaikin money flow has also been unable to make a decision as to direction.

The trend has been lower for both the stock price and year-over-year revenue — the trend is your friend in this case. The declines could keep on coming.