T-Mobile US (TMUS) reported blow-out quarterly numbers after the market close Wednesday and the stock gapped higher Thursday morning, taking out a key level of technical resistance. Shares quickly reversed direction, erasing the 3% gain as some investors who were long going into the earnings report took profits. Nothing has changed regarding the positive fundamentals or the bullish technical picture and the move back below the initial breakout level allows those who missed the move to enter at pre-report levels. 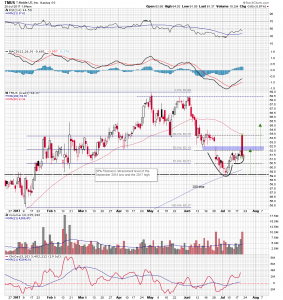 The price action ahead of earnings formed a cup-and-handle pattern on the daily chart above this month’s retest of the rising 200-day moving average and below rim line resistance at the 50% retracement level of the May high and the July low. This morning’s gap up through the pattern rim line retested the declining 50-day moving average and the 38% retracement level of the May high and June low. This was a logical place for a pullback and potentially a retest of the rim line over time. That is what happened but it is a little concerning when it happens in the first 30 minutes of trading. At this point in the session, the stock has penetrated below the $62 resistance-turned-support level.

Moving average convergence/divergence made a bullish crossover as the cup-and-handle pattern was forming, the relative strength index crossed above its 21 period average and both have continued to track higher. Overall volume has picked up over the last several sessions and the Chaikin oscillator, a moving average of three and 10-period Chaikin money flow, has crossed above its signal and center lines.

At this point in time, the stock needs to continue its somewhat unexpected pullback process, and shake-off whatever pressures it is experiencing. The trading strategy is clear, however, and that is to enter long after an upper candle close above $62 cup-and-handle rim line. A pattern price objective for the cup-and-handle is measured by taking the depth of the cup and adding it to the rim line and it targets the $65 area. That would take it back through the 38% retracement level and the 50-day moving average it touched this morning, just use a position size that allows for volatility.

(This article appeared on TheStreet.com earlier.)