T-Mobile US (TMUS) reports earnings after the close Tuesday and the technical pattern on the daily chart suggests the stock is ready to move higher. Shares had been in a steady uptrend for the last six months, tracking above their rising 50-day moving average. Last month, though, the average and the trend line were broken to the downside. The stock quickly dropped back to its 200-day moving average, which was intersecting with the 38% Fibonacci retracement level of its August 2016 low and May 2017 high. 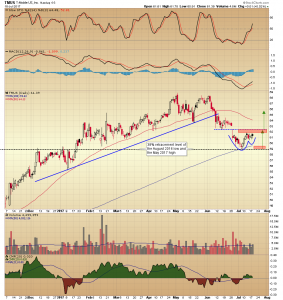 It has been able to hold in this area and in the process form a bullish cup-and-handle pattern, with rim line resistance in the $62.00 area. The cup-and-handle formation consists of a small rounded base or cup that is followed by a retest of previous support-turned-resistance or the rim line. This test is met with some selling pressure and a higher low is made, before another run at the rim line, which forms the handle. The pattern projects an upside price target measured by taking the depth of the cup and adding it to the rim line. In this case, that would be about a 6% advance, which takes stock back above its 50-day moving average, and initial breakdown point in the $65.00 area.

The stochastic oscillator has moved out of an oversold condition and above its center line, and moving average convergence/divergence made a bullish crossover. These indications reflect an early shift in price momentum and short-term trend direction. Overall volume has picked up over the last several sessions and Chaikin money flow is above its signal average and center line. These readings suggest the stock is seeing some buying interest in its current level.

The recent bullish action on the chart suggests T-Mobile is prepared to move higher and a break above the $62.50 level would be a long entry point. If, on the other hand, the report disappoints, there is a well-defined area of support just above the $59.00 level that, if breached, makes the stock an intermediate-term short-sale candidate.

(This article was published on Thestreet.com yesterday morning. There will be a follow-up article on TMUS later today.)