(This article was published on TheStreet.com yesterday afternoon.)

Department-store sales fell again in the latest quarter, though they were better than analysts’ expectations: Macy’s (M) is down 13% and Kohl’s (KSS) is down 10% after reporting before the open Thursday. J.C. Penney (JCP) reports next — before the bell Friday. The chart hints at what investors should expect. 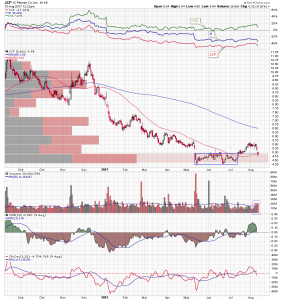 Kohl’s has been the best performing of the big three brick-and-mortar stores, up 7.5% over the last year, with Macy’s and J.C. Penney down 35% and 46%, respectively, in that time. But even Kohl’s the better performer over time has not been immune to today’s sector downdraft, and that does not speak well for JCP in Friday’s session.

The sharp decline in JCP stabilized in May and June with the stock trading in a narrow horizontal channel. It looked like it had formed a base in mid-July after it broke above its 50-day moving average and channel resistance in the $5.00 area, but was unable to capitalize on the move with any significant follow-through strength. This week it began to retreat and, with today’s sympathetic price action, has moved back below previous levels to channel resistance-turned-support and below the 50 day average.

The decline has been accompanied by above-average volume and the Chaikin oscillator, a 3-period and 10-period average of the accumulation/distribution line, is crossing below its centerline suggesting selling pressure. The next level of support on the chart is the channel bottom at the $4.25 level; it is likely that level will be tested Friday, baring a much better-than-expected earnings report. The question is: Will this level hold, or will the stock make a new all-time low?