It was a strong day for the averages and a notable transition in sentiment over the last four sessions. The charts show Thursday’s large down candles which were followed by two small doji candles, and then today’s large up candles. They look like modified morningstar formations, which are bullish reversal patterns, that have formed at several levels of moving average support. 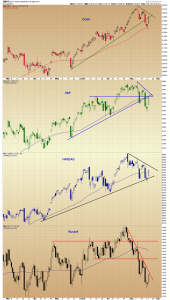 But there are still important areas of resistance to overcome and substantial percentage moves to be made, before the these indices return to trend and the process of making higher highs and higher lows. Today was a good day but only one day. It will take several sessions of follow-through price action to turn the momentum indicators back up, and it will require continued positive money flow.

Volume levels today in the SPY, QQQ’s, DIA, and IWM were below their 50 day moving averages of volume. Unusual for such a strong day. That will have to improve to support a sustained reversal.