Tesla (TSLA) shares were up more than 100% the first half of 2017, but since then have been consolidating in a symmetrical triangle; they are currently nearing the apex of the pattern. A breakout or a breakdown seems imminent and the pattern price projection suggests that, whatever direction the stock takes, the subsequent move will be a large one.

The daily chart outlines the technical levels that will help you get on the right side of the trade. 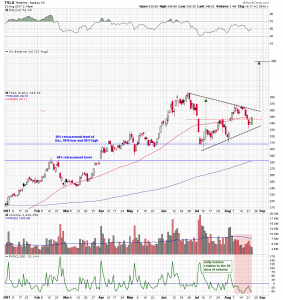 The sharp decline off the June high took the stock back through its rising 50 day moving average before finding support at the 38% Fibonacci retracement level of the previous rally range. It and began making a series of higher lows and higher highs which delineated the triangle pattern. Tesla shares are up a percent at this point in Wednesday’s session, and retesting the center line of the triangle and the 50 day moving average. The relative strength index has been documenting the improving price momentum since the July low, and also making a series of higher lows and higher highs, reflecting the return of the positive price momentum.

Overall volume this month has been well below the 50-day moving average of volume, at several points sometimes as much as 50% below the average. This is to be expected during periods of consolidation and, in this case, it probably prevented the move lower off the August high from gaining momentum and breaking support. Now a simple three-day bearish-to-bullish transition pattern has developed on the chart, which suggests that support will hold. First, a dark hammer candle formed on the uptrend line on Monday, followed by Tuesday’s small doji candle, and then, at this point in Wednesday’s session, a large up candle. It suggests a successful retest of rising support and a move back up to the triangle top.

At this point, it is impossible to say with certainty which way the stock will break, but the technical bias is to the upside, and the price target measure by taking the height of the triangle and adding it to the breakout point, projects a move into the $450 area. Of course, if the stock reverses and breaks through support the decline would be equally as deep.