IBM ( IBM) shares are attempting to move above a key zone of technical resistance that could become a solid base of support for a recovery and potential rally. The stock is down more than 20% year to date and has recently moved below the 50% retracement level of its 2016 low and 2017 high, to retest its October low. These two important technical levels delineate the zone, and Thursday morning’s follow-through to Wednesday’s positive price action has taken the stock back into this key area.

The goal, of course, is to break on through to the other side, above the $145 level, which would also penetrate the downtrend line that has marked this year’s decline. Taking out these two clearly defined technical levels could be the catalyst that sparks some renewed buying interest and the potential rally in the stock. 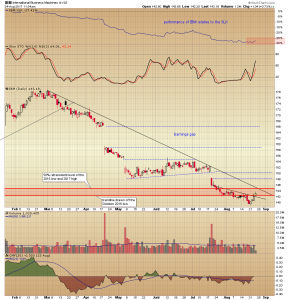 The daily chart shows this year’s steady decline punctuated by downside gaps, and this week’s attempt to penetrate the borders of the zone at $142.50 and $144.75. Chaikin money flow has moved back above its 21-period average and is attempting to enter positive territory, reflecting some buying interest at recent levels. The stochastic oscillator took a sharp jump higher this week and has moved above its centerline in response to the increasing positive price momentum.

Big Blue still has to penetrate and base above the $145 level before it would show any evidence of a shift in trend direction, but if it does, value investors may feel more comfortable about re-entering this blue-chip technology giant with an 11 multiple, and traders might see a momentum opportunity.

(This article was also published on TheStreet.com)