American Express (AXP) has been trading in a regular pattern of 39-day cycle inflection points which have been followed by 7% moves in the stock price. This month’s high marked another cycle point and the stock has pulled back to support at its 50-day moving average.

If the cycle pattern repeats in time and price, AXP is headed back down to the $81 area. Cycle patterns eventually phase out, but if the 50-day moving average is breached, this one deserves traders’ attention. 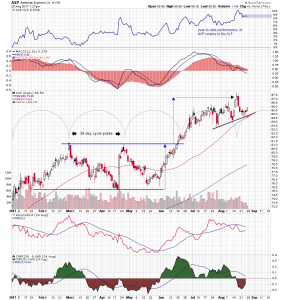 The daily chart shows the stock trading in a wide horizontal channel in the first half of this year, and then breaking above the resistance line in June. The channel price objective is measured by taking the height of the pattern and adding it to the breakout point. In this case, it projected up to the $87 area, and that objective was achieved this month. But it was not only an objective in price but it was also an objective in time.

The stock has been moving in a 39-week cycle that has marked the channel tops and breakout. This August high not only met the pattern price objective, but it did it at another cycle inflection point.

Daily moving average convergence/divergence is overlaid on a weekly histogram of the oscillator, and is tracking lower on both time frames. This represents the decline in positive price momentum and in short-term trend direction. The accumulation/distribution line crossed below its 21-period signal average this month and Chaikin money flow moved into negative territory. These money flow readings suggest selling into this most recent move higher.

The price action last week reflects this transition in investor confidence. Three rising white candles were immediately followed by a large dark candle and then two more down days. The stock price has managed to hold above a short-term uptrend line, which is intersecting with its 50-day moving average, but hasn’t been able to bounce off this support.

The technical signs point lower for AXP shares and a close below the 50-day average is a speculative short entry point, using a tight trailing buy-to-cover stop. An initial price target for the trade is the former channel top in the $81 area.

(This article also appeared on TheStreet.com)