In an interview on CNBC this afternoon, activist investor Bill Ackman restated his argument that payroll software company Automatic Data Processing (ADP – Get Report) is losing market share to its competitors.

On Aug. 4, it was announced in the media that his Pershing Square Capital Management firm had taken an 8% stake in ADP, and on Aug. 17, Ackman presented a 165 page report to investors laying out a case for Pershing Square to pick up three seats on ADP’s board. The stock price responded with volatile moves to these previous Ackman announcements, and a check of the daily chart shows how it is reacting after Wednesday’s interview. 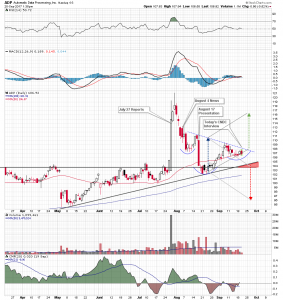 ADP shares spiked more than 13% on July 27 when it was rumored that Pershing had acquired a significant stake in it. Two days after, a shooting star candle high formed marking what appeared to be a blow off top. The stock price declined into the Aug. 4 official announcement and then after the August 17 presentation it dropped sharply back down to the $104 level where all the volatility first began.

Price action Wednesday after the CNBC interview with Ackman has been subdued and the stock is down 0.49% from Tuesday’s close.

A rudimentary inverse head-and-shoulders pattern with a declining neckline has formed on the chart. As the recent volatility has moderated, the relative strength index has begun moving sideways above its center line and the trajectory of the moving average convergence/divergence oscillator, which had made a bullish crossover shortly after the head of the pattern formed, has flattened out.

This month overall volume has dropped significantly and the Ckaikin money flow reading has been lower to slightly neutral. Technical indicators are generally too slow to respond to rumors or flash announcements and often are of little help when volatility is contracting and price action is confined to a narrow range. Then pure price action around well-defined levels of support and resistance is what signals the trade.

The intermediate-term direction of ADP will be determined by either a breakout above the neckline of the inverse head-and-shoulders pattern currently positioned in the $108 area, or a breakdown below the $104 support red zone delineated by the intersecting trend lines. Volatility should return under either scenario.