The broad market indices continue to make new highs taking the track of the SPDR S&P 500 ETF (SPY) from the lower left of the chart to the upper right. There is currently no strong technical evidence which suggests a dramatic shift in that trend, but there are two less popular indicators that suggest an imminent short-term reversion to the 50 day mean. 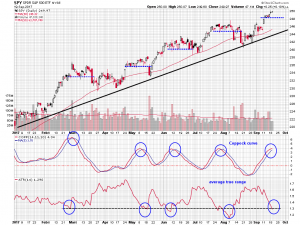 The Coppock Curve is a momentum indicator that is normally used to measure trend on a weekly or monthly time frame. It incorporates two periods of the Rate-of-Change oscillator and a smoothing average to identify buying and potential selling opportunities. On this version of the indicator an additional 5 period average has been overlaid to act as a short term signal line. In this way the indicator can be interpreted like the MacD oscillator using signal line crossovers.

Small and very short-term pullbacks to the 50 day moving average have followed previous bearish crossovers, but these reversions to the mean did not breach the long term uptrend that has defines the year-to-date rally. At the present time, it appears that the Coppock Curve indicator is in the process of making another bearish crossover, and there is a volatility measure that supports this possibility.

The Average True Range indicator is a measure of volatility that incorporates the average range of a stock and is designed to account for price gaps. Normally, a strong move in a stock is accompanied by a higher ATR and a less enthusiastic move by a lower range. The recent slope of the ATR reflects the range contraction over the 14 day look-back period of the indicator. It is back at a level that preceded the previous small pullbacks in the SPY and which were coincident with the Coppock Curve crossovers.

A reversion back to or below the 50 day average this time would be a small percentage move but larger than previous pullbacks, and as the uptrend matures the likelihood of a break below the long-term uptrend line increases. The trend is your friend but keep a close eye on future reversions.