From a technical perspective, there isn’t a whole lot more that could be going wrong on the Amazon (AMZN) weekly chart.

A cluster of bearish indications in time and price have weighed on the stock the last several months. Key support in the $950 area is breaking down at this point in the Monday session. That could trigger an intermediate-term move that could take the stock down 20% from its July high.

Let’s catalog the technical damage and look for potential areas of support on the downside. These areas are used to help set stop-loss levels, for those who are currently long Amazon, and find low-risk entry points, for those who are looking for buying opportunities. 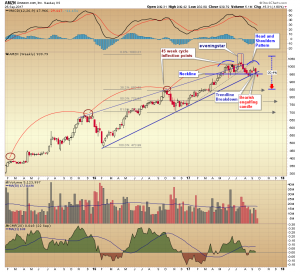 Amazon had been trading in a rising triangle pattern for the last two years and last week a bearish engulfing candle formed that broke the triangle uptrend line on a closing basis for the first time. An interior uptrend line drawn off the 2017 lows was broken last month. This high is also the center candle of a three-period eveningstar bearish reversal pattern. The high wick “doji” candle center of the eveningstar is also the “head” of a head-and-shoulders bearish reversal formation.

A large eveningstar or a head-and-shoulders formation often signal the end of a rally phase. When they merge as a complex hybrid, their importance is multiplied. Amazon has been charting a series of 45-week cycle high inflection points, with the last coming at the July high. Since it began trading in the rising triangle pattern in 2016, these cycle inflection points have marked short-term tops.

A major complex bearish hybrid reversal pattern forming at a cycle inflection point and a combination of breakdowns that trigger off multiple support lines, is likely to have some momentum behind it. If the $950 level does give way on a closing basis, the first downside target is the $850 level. This would be a 38% Fibonacci retracement of the 2016 and 2017 range, a retest of the previous October high level, and the price target objective of the head and shoulders formation. It would also constitute a 20% drop for Amazon shares from their July high, which is the technical definition of a bear market. Below the $850 level are the remaining Fibonacci retracements and finally the 2016 low.

Amazon is a powerful player unencumbered by normal fundamental metrics, but it looks like the technical indications have caught up with the stock price.