It has been a bumpy ride for holders of Harley-Davidson (HOG) shares this year. The stock is down of 20% from its March high, but a cup-and-handle pattern has formed on the daily chart and it may be signaling a reversal is right down the road.

After hitting its March high the stock starting making a series of lower highs and lower lows alongside its declining 50-day moving average and below a well-defined downtrend line. It has pulled back to the 62% retracement level of its 2016 low and 2017 rally high. 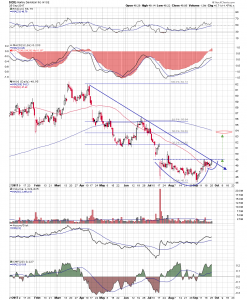 For the last several months the move has moderated, forming a cup-and-handle base under horizontal rim line resistance in the $49.00 area. Today it is retesting both the long-term down-trend line and the pattern neckline.

As the pattern was under construction, the relative strength indicator began moving above its rising signal line, and daily moving average convergence/divergence, which is overlaid on a weekly histogram of the oscillator, started tracking higher on both timeframes. These readings suggest improving short- and intermediate-term price momentum.

The accumulation/distribution line crossed above its signal average as the bottom of the cup was forming, and Chaikin money flow is now securely in positive territory. These are signs of buying interest and improving investor confidence.

The cup-and-handle pattern identifies a price objective measured by taking the depth of the cup and adding it to the rim line. It targets the intersection of the 200-day moving average and the 50% retracement level of this year’s decline. An upper candle close above the rim line is a long entry point using a disciplined trailing percentage stop.