There may be a deeper aspect to the decline in the broader technology sector than its overbought condition or valuation, and it goes directly to the engine that drives the space. Social media algorithms are as deeply entwined with the technology sector as they are with our personal lives.

Information broadly gathered from social media is key to the amalgam of business and technology. Now social media companies are coming under increasing pressure from government agencies and special interest groups, and it is reverberating through the entire technology sector.

Facebook and Twitter (TWTR – Get Report) are under fire from the left for their role in the perceived Russian hacking of our presidential election, and from the right for being platforms for what it believes is “fake news.” Alphabet (GOOGL – Get Report) is facing anti-trust scrutiny for European authorities and China is seeking more control over the internet, specifically, the Facebook WhatsApp messaging service. 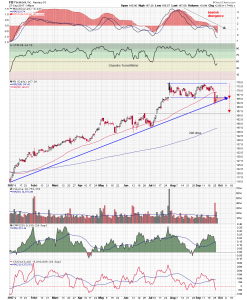 The stock saw a sharp decline in Monday’s session, which took it back below its 50-day moving average and its August low, and retested the long-term uptrend line that has delineated the rally this year. At this point in Wednesday’s session, it is trading back above its $165 August low and near the high of the day. The stock closed at $167.68 Wednesday.

The technical momentum indicators, however, are still decidedly bearish. Daily moving average convergence/divergence is overlaid on a weekly histogram of the oscillator and has been tracking lower on both time frames. The Chandre Trend Meter, which uses multiple moving averages over six time frames to assign a number to the strength of a trend, is below its center line.

On the money-flow side, Chaikin is in positive territory but has moved below its signal average, and the Chaikin oscillator, a faster average of Chaikin money flow, has crossed below its center line.

The intermediate-term future of Facebook and potentially the broader technology sector depends on the short-term integrity of the red support zone. If the stock price is able to hold that level and move back above its 50-day moving average, the focus becomes the $175 level and potentially new highs. If support is retested and fails, the first downside target is the former June high at the $155 level, and then the 200-day moving average.