The consumer staple sector, as represented by the Consumer Staples Select Sector SPDR Fund (XLP) is testing an important support level on its daily chart. It is a potential level for a bounce but a breakdown would indicate the poor performing components of the ETF have lower to go.

The XLP made three attempts to break above the $55.50 level and failed and has pulled back off that level. On Thursday it retested a zone of support delineated by the rising 200 day moving average and a horizontal support line drawn off the July low and the 38% retracement level of the December 2016 low and this year’s high. A hammer candle formed which is a bullish sign when it forms at previous support levels.

Here is a chart of some of the components of the XLP, and a majority look like they have previously pierced resistance levels of their own. 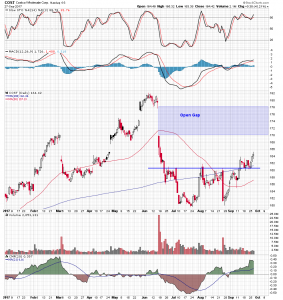