Apple (APPL) has been underperforming the broader technology space for the past six months, and that underperformance could accelerate if a key level of support is broken on the daily chart. The Technology Select Sector SPDR ETF (XLK) is up 11.5% since last April, while Apple shares are up 7.3% in that time, and over the past month the XLK is up 2% and Apple is down 5.6%. Apple needs to hold above recent support long enough to regain some upside momentum. A break below this important technical level is likely to trigger an intermediate-term decline. 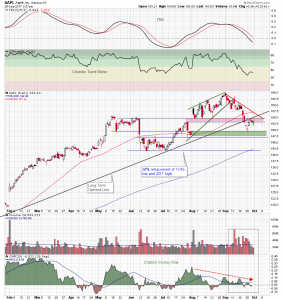 The strong advance in Apple off the November 2016 low up to the May 2017 high was followed by three months of sideway-to-lower price action. In August, it was able to advance above May resistance to new highs in a rising triangle pattern. That move was short lived, and the stock reversed direction this month. That reversal took it back below the May high level and through the uptrend line that delineated the long-term rally. This week, it bounced off a support zone between $148 and $150 and is retesting former support-turned-resistance in the $153 to $155 area. There is the possibility that Apple shares can hold their current level long enough for them to gain some momentum and pierce through the multiple layers of resistance overhead, but the technical indicators suggest this will not be the case.

The TRIX indicator is a triple-smoothed momentum indicator similar to the moving average convergence/divergence oscillator, and it has made a bearish crossover. The Chandre Trend Meter assigns a numerical value to a trend using several moving average of six different time frames, and it has weakened significantly this month. A spike in overall negative volume and declining Chaikin money flow supports the bearish momentum and price trend indications.

The longer Apple shares are able to hold above the green zone of support which would allow indicators time to realign more positively, the more likely a return to the primary uptrend. If that level of support fails, however, it could accelerate the distribution reflected in the money flow reading and the stock would see an intermediate-term decline.