The iShares Russell 2000 ETF (IWM) has been trending higher in a wide broadening top, but don’t let the word “top” fool you. It may have more upside.

Small caps spent most of the first half half of this year making higher highs after which they returned to support at the $132 level. Following the May high, the same pattern of higher highs continued but the support level was raised two dollars to the $134 level. This week the fund returned to the well-tested uptrend line of the “top” pattern and instead of beginning another descent back to support, it broke through to new all-time highs. There has been speculation this is a blow-off “top” but there’s that word again. Let’s look at the chart. 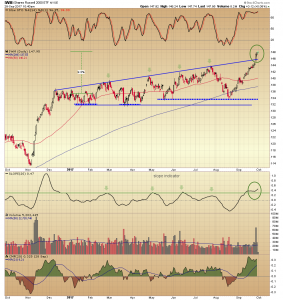 The stochastic oscillator states the obvious which is the IWM is overbought. On the slope graph, which is the rise-over-run of a straight line that defines a 20-day look-back period, the reading is above the previous 0.30 level which marked the deviations at the previous highs.There was a surge in volume this week that prompted the blow-off top speculation and money flow suggests the small caps remain under accumulation.

What logical inferences can be made at this point?

• Any stock or fund can stay overbought for an extended period.
• Patterns and cycles end.
• Volume powers moves.
• The IWM could go higher.
• The IWM may be topping out.

But only one conclusion can be drawn: When in doubt do nothing.