With technology stocks on fire this year, Jim Cramer decided to go Off the Charts with Bob Lang to take a closer look at the semiconductor sector.
Lang is the founder of ExplosiveOptions.net and is a contributor to TheStreet.com’s Trifecta Stocks newsletter.

Lang noted that the the VanEck Vectors Semiconductor ETF (SMH) is up 1,200% since the 2009 lows, dwarfing the gains in the S&P 500 over the last 8 years. That suggests that there are more semiconductor companies besides NVDIA (NVDA) which are performing well.

Cramer and Lang started with a chart of Intel (INTC) , the old guard chipmaker. Shares of Intel shot higher a month ago, and the stock’s now at its highest levels since the dot-com collapse in 2000, according to Lang. The stock’s strength has brought much of the semiconductor index with it. 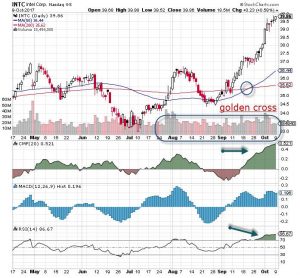 And the Chaikin Money Flow Oscillator, a measure of buying or selling pressure in a stock, turned from negative to positive three weeks ago and has surged since. That tells Lang that big institutional buyers are piling into the stock. Lang also notes that turnover has been strong, with shares up 20% since Intel’s last earnings report, a very large move for a company with a big market capitalization, such as Intel. The company reports next week, setting up the possibility for a decline given the big run shares have already seen. Cramer says if that happens, it should be treated as a buying opportunity.

Not all semiconductor stocks have been performing well. Qualcomm (QCOM) , which makes communication chips and the software used in a lot of cell phone technology, has repeatedly disappointed bulls this year. But that may be about to change. 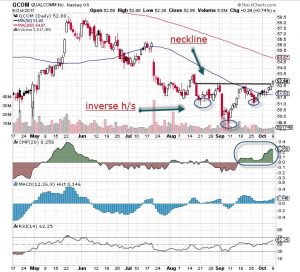 Lang said Qualcomm’s chart shows it could be ready to move higher. It has made an inverse head and shoulders pattern, a reliably positive pattern. That could set it up for a quick trip to $56, according to Lang. The stock has already broken above a ceiling of resistance at $53, and the relative strength index has been rising. In addition the Moving Average Convergence Divergence indicator is bullish as well as the Chaikin Money Flow oscillator. Heavy option flow in the December 55 and 57.5 calls also indicates many buyers think Qualcomm will go to at least $60 by the end of the year. Qualcomm reports in three weeks.

Broadcom has benefited from a series of acquisitions and the stock is now up 120% just since the beginning of 2016. Lang notes that Broadcom has made a series of higher highs and higher lows, with the stock’s 20-week moving average acting as a floor of support. In addition, Broadcom has made a bullish flag pattern here — where the stock trades sideways after a big rally in order to digest its gains. Typically, this kind of formation eventually leads to an upside breakout. According to Lang, if Broadcom can rally above $250, he expects the stock will start heading to $300 pretty quickly.