Wall Street is expecting a 22nd consecutive quarter of declining revenue from IBM (IBM), when the company reports its third-quarter earnings results after the close Tuesday. Disappointing first- and second-quarter reports this year were followed by downside gaps in the stock price, but this time may be different.

The stock has moved back above several key technical levels of resistance, which should now supply support. If those levels can withstand another poor earnings report and prevent any further decline in the stock price, it would be a sign that IBM is on the road to recovery. 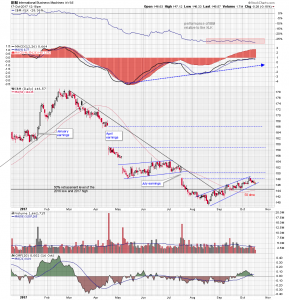 Despite the long string of revenue misses, IBM rallied over 60% off its February 2016 low to its February 2017 high. That trend reversed when the stock price slipped back below the rising 50-day moving average and accelerated with the April downside earnings gap. A rising channel pattern began to form ahead of the July report, but after it was released, the stock price gapped lower again.

A new rising channel formed ahead of Tuesday’s report and there are some slight positive technical differences. Recent price action has taken the stock back above the 50% retracement level of the February 2016 to February 2017 rally. It has also broken through the downtrend line of the decline this year that followed the rally, and moved back above its 50-day moving average.

Daily moving average convergence/divergence is overlaid on a weekly histogram of the oscillator and has moved above its center line on both time frames. This reflects positive short-term price momentum and trend direction. Chaikin money flow had been positive for the last month but dipped into negative territory last week. The direction of money flow will have to improve to support the continuation of the short-term trend.

The key level for IBM shares going forward is the intersection of the 50-day moving average and the 50% retracement level, in the $144 area. Even if Tuesday’s earnings report is another disappointment, if this level is able to hold and money flow improve, it would suggest an important low has been made and Big Blue may be on the road to recovery.