Allergan (AGN) shares have pulled back to a key level of technical support on their weekly chart. This same support level was successfully tested in October last year and was followed by a 30% bounce in the stock price. The indications on the chart suggest that another significant bounce is likely, one that could help to establish a base and reverse Allergan’s long-term downtrend. 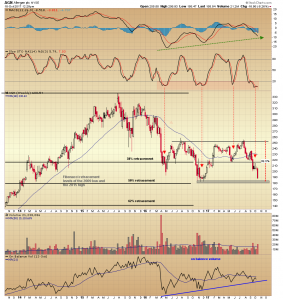 The stock rallied more than 1,400% from its 2009 low to its 2015 high. Over the last two years, however, it has made a series of deep lower-lows followed by sharp reversal higher-highs. In October last year, shares returned to test the 50% retracement level of their previous rally range. This $180 level held and over the next several months the stock moved back up to the $250 area.

The 38% retracement level of the rally range acted as a new higher level of support until last week when it was broken. The break has quickly taken the stock price back down toward the $180 area. This is where the technical indicators suggest the stock would be expected to bounce.

There are several technical similarities to the previous October test. The stochastic oscillator is in an oversold condition and in prior instances when it is either overbought or oversold, it does not stay overextended for long periods. On balance, volume made a higher high last October and it has continued to track higher. The price action over the last two months caused moving average convergence/divergence to make a bearish crossover, but it has been making a long-term series of higher lows, in bullish divergence to the stock price.

The downside momentum in the stock could see it initially over-shoot and take it through the $180 level, but after a period of consolidation in this area, traders should be alert to bullish reversal candles or formations and be prepared for a volatile bounce.