Microsoft (MSFT) shares are up 30% year-to-date, moving from the lower left of the chart to the upper right in a steady pattern of higher highs and higher lows. It’s been a beautiful rally, if you’ve been on board, but if you missed an opportunity to participate, there may be another one coming up. 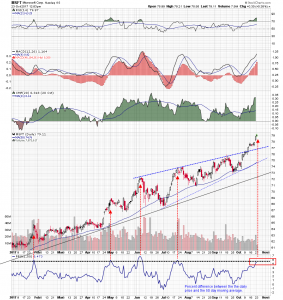 The daily chart shows Microsoft shares moving above their rising 50-day moving average and above an uptrend line that extends back to last year. In June, the trajectory of the advance started to steepen and the stock began trading in a well-defined rising triangle pattern. After the most recent successful retest of the 50-day moving average earlier this month, it accelerated higher and broke through triangle resistance. But by several technical standards, the stock has become overbought and is ready for a pullback.

The relative strength index reflects the current overbought condition but in the context of a rising weekly moving average convergence/divergence histogram. Also supporting the premise that any pullback will be short-lived and be met with additional buying interest, is the reading on the Chaikin money-flow indicator. It is well into positive territory and suggests institutional buying has been powering the rally.

The pullback premise is largely based on the graph at the bottom of the chart. It shows the percent difference between the closing price of the stock and its 50-day moving average. The stock is trading 5% above the 50-day moving average and each time this has happened this year, it has been followed by a reversion of some degree.

It is impossible to say how deep or how sustained any pullback would be, but a return to within the borders of the rising triangle is very likely, and a retest of the 50-day moving average would be an optimal entry point for those looking to get on board the Microsoft rally train.