(This article was originally published on TheStreet.com on 10/24.)

Time Warner (TWX) reports earnings before the market opens Thursday morning. Currently the stock is trading at a discount to the $107.50 that AT&T (T) is paying in the proposed merger of the two companies expected later this year. So is it time to buy TWX?

The price action on the daily chart suggests there may be an even lower entry point for investors coming up in the near future. 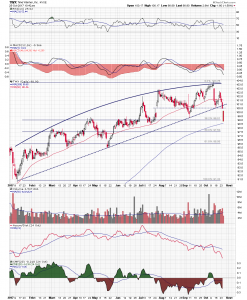 Shares have advanced this year in a steady arc of higher lows and higher highs. The lows have defined a strong uptrend line and the highs have traced out a curve with a moderating trajectory. The stock price has once again moved back below its rising 50-day moving average and is retesting the uptrend line. The momentum indicators reflect the recent loss of positive momentum. Moving average convergence/divergence has made another bearish crossover and is moving below its center line, while the relative strength index has crossed below its 21-period average and is below its center line.

It’s the money-flow indicators, however, that are the most important data points. They suggest this latest test of long-term support is likely to fail and could take the stock price much lower. The accumulation/distribution line broke below its signal average in July and has continued to track lower, and Chaikin money flow has spent most of the last three months in negative territory. The selling has been going for several months but as the trend lines merge and the price range compresses, the current retest of the $100-area could be an inflection point for the stock.

Using the height of the channel pattern the stock has been trading in, and subtracting it from current support to identify a downside price objective, targets the $97 level. This would be a 50% retracement of the 2017 range and some stabilization and consolidation in this area would be a good point to enter a position in Time Warner shares.