(This article appeared on TheStreet.com on Thursday.)

The decline in the U.S. dollar this year is likely over, which would benefit stocks that do most of their business in this country. An inverse head-and-shoulders pattern has formed on the weekly chart of the U.S. dollar index below resistance in the 94 area. This pattern is often seen at important lows in a stock or an index.

The July low formed the left shoulder, and the September low formed the head, while the October low formed the right shoulder of the pattern. A move above horizontal neckline resistance confirms the breakout and should act as a platform to launch a reversal rally. If this turns out to be the case, then companies that do most of their business in the US are in the best position to profit from the bounce in the buck.

Harley Davidson (HOG – Get Report) has been facing increasing pressure from competitors in Japan, and a stronger dollar would help its bottom line. The weekly chart of Harley Davidson looks very similar to the U.S. dollar chart, with the stock breaking down in unison with the dollar this year and then forming a base over the last several months. The horizontal HOG base includes a triple bottom formation and resistance situated in the $50 area. A break above this level, likely coordinated with a breakout in the dollar, would be a bullish sign for the stock and signal a long-term bottom. 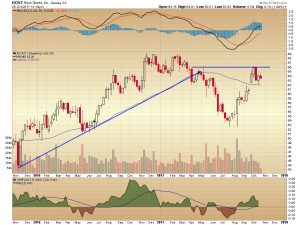 Ross Stores (ROST – Get Report) does all its sales in the U.S. and is a retail chain that would benefit from a stronger dollar. The stock bounced off the $52 level in July, which was also important support in 2016. It has rallied back above its 40-week moving average and just below its all-time high made earlier this year. Weekly moving average convergence/divergence has made a bullish crossover and Chaikin money flow is in positive territory. The stock looks like it should continue higher on its own, but a breakout in the buck would be a powerful fundamental supplement to the technical picture. 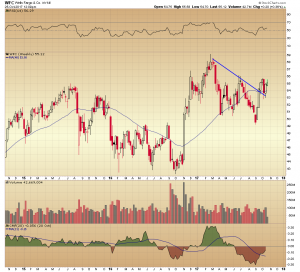 A stronger dollar could benefit Wells Fargo (WFC – Get Report) , a bank that has a large U.S. mortgage business. The company’s stock price has been under pressure recently, but this month has managed to move above a downtrend line in place since the beginning of the year and its 40-week moving average. Money flow is improving along with the positive price momentum and the stock looks like it is ready to reverse this year’s pattern of lower highs and lower lows, and continue higher. Dollar strength would help Wells make new highs and help recover from its fall from grace this year.