CVS Health (CVS) reportedly made a $66 billion offer to buy Aetna Inc. (AET) in what would be a record deal in the healthcare industry. The integration of the healthcare benefits company with the healthcare services provider creates a number of efficiencies, not the least of which is the ability to leverage for better drug pricing. But what should be a healthy fundamental synergy is not being reflected in the sick technical picture on the CVS chart.

While Aetna shares jumped on rumors of the deal, shares of CVS dropped, breaking an important long-term support level. The weekly chart of CVS shows where it might be headed over the intermediate term. 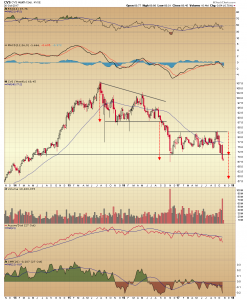 A large triangle pattern formed in 2015 and 2016 above horizontal support in the $87 area. That support level ultimately failed and the stock price dropped sharply, before finding secondary support in the $71 area. At that point, it began to trade in a sideways channel pattern. Last week the channel support line failed and CVS made its lowest close since 2014.

The relative strength index has moved back below its 21-period average and is under its center line. Moving average convergence/divergence was unable to recapture its center line and now has made a bearish crossover. These readings, while becoming more bullish as this year’s channel consolidation developed, quickly turned down after the most recent retest of channel support, reflecting a rapid shift in momentum.

The money flow indicators were less positive during the formation of channel pattern. Chaikin money flow spent most of that time in negative territory, and the accumulation/distribution line has been tracking lower and below its declining signal average over the last several months.

It seems the positive fundamental synergies of the potential purchase of Aetna are not evidenced on the CVS price chart. The technical inference is that shares are headed lower. The channel pattern downside objective is measured in the same way as the earlier triangle pattern, by taking the height of the pattern and subtracting it from the broken support level. In this case it targets the $58 area.