Twitter (TWTR) jumped 28% in the final three trading days of October, but a week later they had retraced half of that move. The retracement tested the top end of the October gap at the $19.50 level and it held. Twitter shares rebounded.

Last month’s final week rally took out some long term resistance and made a higher high on the daily chart. There was, also, some speculation in the financial press that investor or trader sentiment was shifting and that Twitter had turned a corner. That may turn out to be the case, but the price action over the last three sessions has formed a fairly reliable bearish reversal pattern. 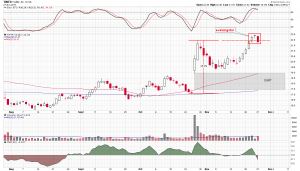 The eveningstar pattern consists of a large up-day candle, followed by a narrow opening and closing range “doji” candle, and completed by a large down-day candle. It represents a transition from bullishness to bearishness.

Of course, all candle patterns require confirmation and even if the eveningstar is confirmed by downside follow-through, it does not signal the end of the intermediate term strength in Twitter. It could just reflect a healthy digestion of the rebound gains. On the other hand, if the $19.50 level is retested and fails, the stock would enter a support vacuum created by the October gap higher.

A return to the gap low would be technically significant and any earlier Twitter optimism would likely evaporate.

Federal Reserve Chair Janet Yellen said yesterday that she is ‘very uncertain’ about the path of inflation: “My colleagues and I are very uncertain that it [weak inflation] is transitory.”

Their inability to stimulate inflation numbers is obviously problematic for the Federal Reserve. While the trajectory of the “dot plot” has not been a concern for the broader stock market, the bank stocks do not like a flat yield curve.

A head and shoulders top may be forming on the daily chart of Financial Select Sector SPDR ETF (XLF) above neckline support in the $25.80 area.

A break below the neckline projects a downside target measured by taking the height of the pattern and subtracting it from the neckline. In this case, it projects back down to a rendezvous with the rising 200 day moving average, near the $24.60 area.

These three stocks have not participated in the holiday inspired strength in the stock market this week. This lack of participation is highly suspicious and suggests that when the “spirit” fades they will be headed lower. 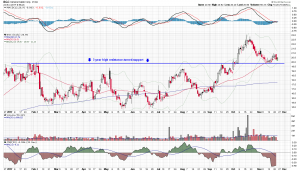 A large bearish engulfing candle formed on the General Cable (BGC) daily chart. The stock closed near its low and below the 50 day moving average. Watch the $19.75 three year high resistance-turned-support level. 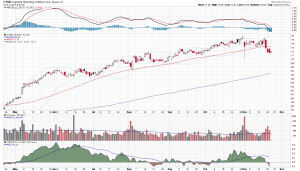 Cognizant Technologies Solutions (CTSH) has had three down days in a row and now its below the 50 day moving average.

Intel (INTC) trying to hold $44.50; a break below that level could accelerate the stock price back into the vacuum of support left behind by the upside gap and take it down to the 50 day moving average.

The market action today was typical for a Thanksgiving week. The averages were up and volume was down. So, a stock that was down on better than average volume is something to take note of.

Shares of Oracle (ORCL) were down 0.8% and volume was greater than the 50 day moving average of volume. Take note. 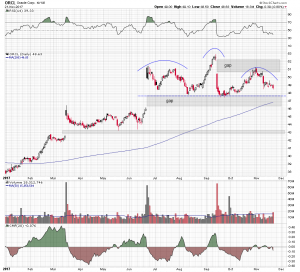 A large head and shoulders pattern has been forming on the Oracle daily chart above neckline support in the $48 area. The June and July highs formed the complex left shoulder and the September high marked the head. A high early this month failed to close the September downside gap and the subsequent fade has formed the right shoulder of the pattern.

Chaikin money flow has been oscillating around its center line and the relative strength index is tracking lower and below its centerline. These readings reflect the loss of positive momentum and a lack of investor commitment.

The head and shoulders downside pattern price target is measured by taking the height of the formation and subtracting it from the neckline. It targets the $43 level and would close the two lower gaps on the chart.

Inphi Corporation (IPHI) makes semiconductors for the communications industry. Its stock price has been consolidating in a sideways pattern above support in the $34 area and below resistance in the $41 area, for the last seven months.

A bullish moving average convergence/divergence (MacD) on the weekly chart in September preceded the October bounce off the channel low, and was followed by Chaikin money flow moving into positive territory.

On the daily chart, the consolidation phase looks like a rounded bottom. The 50 day moving average has a gentle positive slope and is on course for a rendezvous with the slightly declining 200 day average. 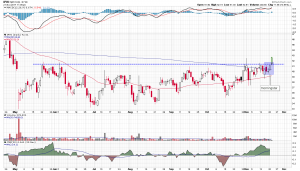 The morningstar pattern was highlighted on our Twitter feed (@rightviewrob) yesterday. This three period pattern consists of a large down-day candle, followed by a narrow opening and closing range “doji” candle, and completed by a large up-day candle. It represents a transition in investor sentiment from bearishness-to-bullishness.

Now add the fact that there is a 25% short interest in the stock and you have the catalyst that powers the breakout. A short-covering rally is a distinct possibility. 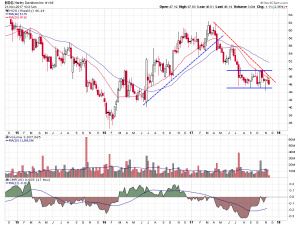 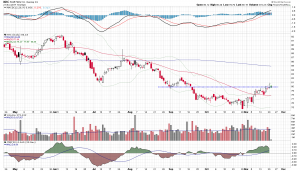 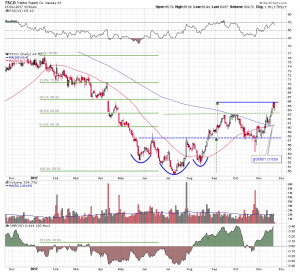 In the last three weeks shares of Cummins International (CMI) fell more than 10%, closing out last week near their lows and on the 40 week (roughly 200 day) moving average. Caterpillar (CAT) held up well during this same period and traded in a narrow range just above the $135 level. 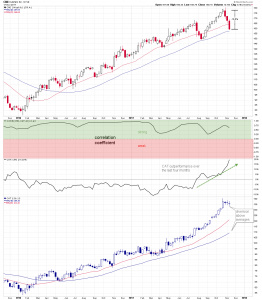 The correlation coefficient graph on the chart shows the close correlation between the two stocks. They trade in close coordination most of the time.

Directly below the correlation graph is a chart of the performance of Caterpillar relative to Cummins. It shows that for most of the charted period Caterpillar has been the under performer, that is until last August. Since then it has steadily outperformed its competitor, currently by about 20%.

The takeaway from these indications is that Caterpillar’s valuation is overextended and the pullback back in Cummins should moderate. In other words, there should be some normaliztion between the two stocks.

Several names in the casual dining space are breaking out of extended basing periods and look like they are headed higher.

BJ’s Restaurants (BJRI) retested and held its 50 day moving average two weeks ago, and then last week gapped up through horizontal resistance in the $32 area. It built on that initial gain and closed near its high of the week.

Brinkers International (EAT) the parent company of Chili’s, had been consolidating for the last three months under horizontal resistance in the $33 area. It broke above its 50 day moving average at the beginning of the month and rallied up to resistance. Repeated testing of this level eventually led to a confirmed breakout.

Cheesecake Factory (CAKE) has defined horizontal resistance in the $45.75 area but is having some difficulty closing above it. If you look at the charts individually with money flow indicators, CAKE is the most heavily accumulated. The implication is it will catch-up with the two other stocks in the space. 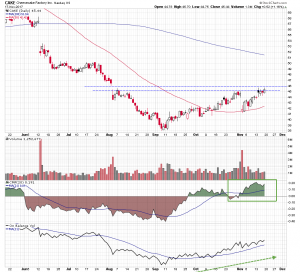 Someone did not want Apple (APPL) shares to close out the week on their lows. 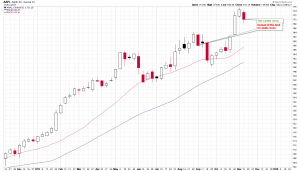 It is subtle difference but something a technician would notice.

Will it make a difference in the open on Monday? Probably not, it is only one candle. The bearish outlook on Apple in the previous post was based on the daily chart and its indications.

The good news is that Tesla (TSLA) shares are up a percent at this point in the session; the bad news is they had been as high as 4.5% shortly after the open.

They could reverse once again and close higher on the day, but it is a familiar pattern. The initial enthusiasm about a new product associated with a story stock evaporates quickly and the price fades.

Tesla has been particularly susceptible to this dynamic.

The dark candle that is currently in place on the daily chart suggests some level of failure and the stock price is back below its 200 day moving average. A move next week back below the $305 support level would be particularly bearish.