When we look at the Tesla TSLA chart in a few years, it may be that we see a double-top that formed in 2017 and marked the high in the stock price.

The June and September highs in the $385 area form the potential double-top. They also define the horizontal upper end of a six month rising triangle. The uptrend or support line of the triangle was decisively broken last week, and the stock closed on its 40 week moving average. It is down another 7% at this point in the Friday session. 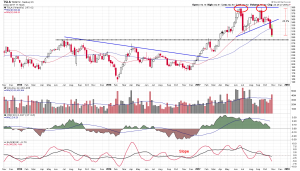 Chaikin money flow has moved below its signal average and is tracking lower. This reflects distribution during the development period of the triangle pattern. The 10 week slope indicator has dropped below the 20 week indicator and both have moved below their center lines. Slope measures the rise-over-run of a linear regression line. The readings on two time frames are signs of loss of positive momentum and trend direction. 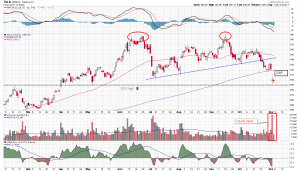 The stock gapped lower this week on heavy volume and is positioned just above the 2015 high level. But even it is able to hold this level and consolidate, the multiple levels of former support now become multiple levels of resistance, and it would require a 30% move from its current level to make a new high.

The technical obstacles coupled with a number of continuing fundamental issues centered on vehicle production and burn rates suggest that a 30% move higher is not in the cards, at least not in the near future. But, of course, the most logical analysis can be turned on its head by a stock with a story and a guru-like CEO.