Shares of Lululemon Athletica (LULU) have been consolidating in a horizontal channel for the last four months, and the technicals are pointing to a volatile bullish breakout. 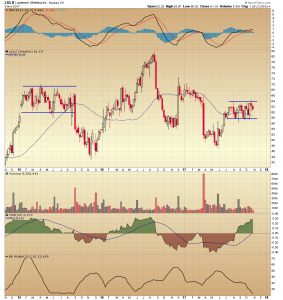 In 2015, the stock was trading in a similar channel pattern and the Bollinger bandwidth reading was extremely low. A very low reading reflects narrow bandwidth and low volatility.

Periods of low volatility are often resolved by periods of high volatility. This was the case in 2015 when the stock broke down through channel support and dropped sharply lower.

The current Bollinger bandwidth reading is, again, reflecting bandwidth compression, and the potential for another volatile channel break. This time, however, the momentum and money flow indicators moving in the opposite direction they were prior to the 2015 break.

Now the MacD oscillator is tracking higher, along with the Chaikin money flow indicator. These readings reflect positive price momentum and money flow, and the inference is an impending volatile move in the stock will take out the $64 channel resistance level.