5 ways to diversify away from tech from CNBC.

>
The following is a synopsis of Tuesday’s “Off the Charts” segment on Mad Money, by Tom Bemis of TheStreet.com:

With the market’s remarkable run over the past year, Jim Cramer told his Mad Money viewers Tuesday, it’s time to start asking if any of the groups leading the gains are less attractive.

To find out more, Cramer invited to his Off the Charts segment Bob Moreno, publisher of RightViewTrading.com and a contributor to RealMoney.com.

Starting with red-hot tech stocks, Moreno told Cramer that a shrinking number of stocks are accounting for the group’s gains.

Apple (AAPL), Alphabet (GOOGL), Microsoft (MSFT) and Intel (INTC), all reported excellent numbers a few weeks ago. The problem is, they account for almost 40% of the weighting in the Technology Select Sector SPDR Fund (XLK). So their strength has driven the bulk of recent gains.

In addition, the number of stocks in the NASDAQ 100 trading above their 50-day moving average is falling. Together it adds up to a case of bad breadth, and a bad sign for the rally. 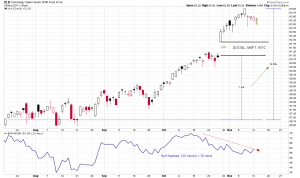 The solution, as always, is diversification, according to Cramer and Moreno.

With oil holding its recent gains in the mid $50 range, Moreno pointed to the the VanEck vectors Oil Services ETF (OIH) . It’s been trading sideways in a triangle pattern below $26. A rally above that should lead to a break-out move. The vortex indicator, a technical tool to spot early trend changes, recently signaled a bullish crossover (Where the green crosses above the red on the chart.) In addition the Chaikin money flow indicator, which measures buying and selling pressure, is in positive territory. 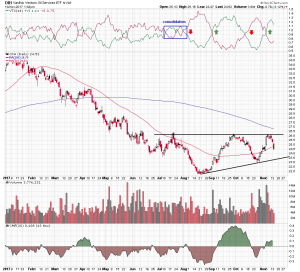 In the consumer discretionary space, Moreno likes the daily chart of Starbucks (SBUX), a holding in Cramer’s charitable trust. (You can follow his moves before he makes them by joining the ActionAlertsPlus.com club.) Starbucks has been consolidating in a triangle pattern since August, with the stock stuck below some key levels, including its 200-day moving average.

Moreno notes that last week Starbucks briefly broke out above its ceiling of resistance and started to fill in the big gap down that it made when the stock sold off hard in July. While shares have pulled back a bit since then, Moreno likes that the Moving Average Convergence Divergence, or MACD, indicator, a momentum tool that detects changes in a stock’s trajectory before they happen, has been trending higher and the Chaikin money flow is moving into positive territory. Moreno thinks that Starbucks’ consolidation phase may be over, with the stock finally ready to make a sustained move higher. 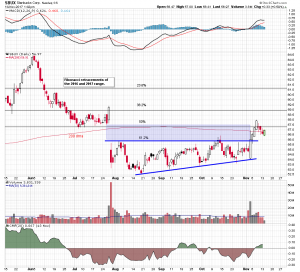 Another place to diversify is healthcare. Moreno likes Abbott Labs (ABT) . Moreno says Abbott has a picture perfect uptrend, with the stock steadily rising above its 50-day moving average. In recent weeks Abbott has been trading sideways. Plus, the Chaikin Money flow has been stuck around zero, although it’s now started to turn positive again. 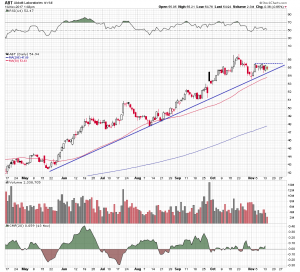 On the other hand, the Relative Strength Indicator, an important momentum gauge, is giving some bullish readings. Moreno notes Abbott has made two successful retests of its floor of support this month. He thinks it’s poised to break out above its $55.50 ceiling then resume its long march higher.

In the financials space, Moreno likes Wells Fargo (WFC). This bank has had more than its share of troubles, which is why the stock is flat for the year while the broader sector has rallied 14% over the same period. Moreno sees some technical signs that Wells might be getting ready to normalize and start trading more like the other big money center banks. 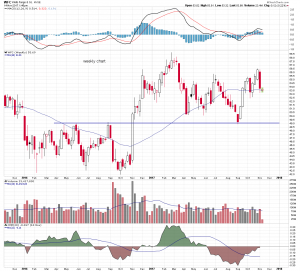 The stock has drifted back over its 40-week moving average and held there, at least so far this week. The Moving Average Convergence Divergence has made a bullish crossover, and the Chaikin money flow’s been rising steadily, recently entering positive territory. Moreno thinks that Wells Fargo could be a good catchup play with the Fed widely expected to raise interest rates next month.

Within retail Moreno likes the daily chart of Costco (COST) , which has recently soared after a breakout above its 200-day moving average earlier this month. The rally’s been powered by strength in the Chaikin Money Flow oscillator and Moreno believes the stock has more upside. 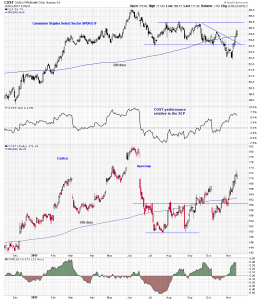 And among industrials, Moreno still likes Honeywell (HON), up 8% since July. The Relative Strength Index is strong, tracking above its centerline. The Chaikin money flow is in positive territory, indicating that big investors continue to load up on this stock. Moreno thinks there’s simply no reason for Honeywell’s uptrend to change any time soon. 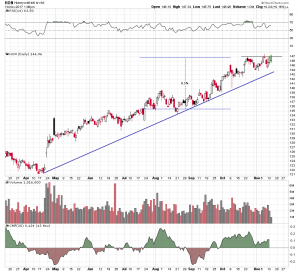