Shares of Alibaba Group Holdings (BABA) have been advancing over the last four months in a well-defined pattern of higher highs and higher lows. The range of this pattern has been expanding, in a similar way to a widening top or megaphone pattern, but without the lower lows. 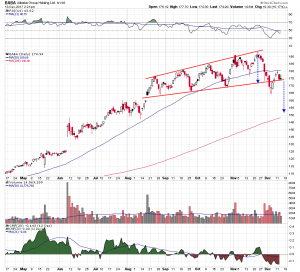 At the beginning of December the uptrend or support line was breached. It was quickly recaptured but the flat 50 day moving average situated just above the rising trendline, has contained the bounce and halted a move to return to the upper end of the pattern and make a new higher high.

A large dark candle formed in Tuesday’s session and at this point in trading today, a small gravestone doji is in place. The relative strength index has been tracking lower and below its centerline for a month, and Chaikin money flow is in negative territory.

It appears the integrity of the uptrend line is in jeopardy and a breakdown projects a measured move which would retest the 200 day moving average.