Over the last two months a cup and handle-like pattern has been forming on the Walgreens Boots Alliance daily chart. Rim line resistance is located in the $73 area. That resistance is currently being retested and the technical indications are suggesting that, ultimately, the stock will break out. 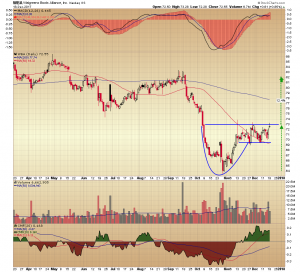 The October decline and rebound in Walgreens’ shares was followed by horizontal consolidation between $69 support and the $73 resistance level. This combined price action formed the cup and handle pattern.

On this chart, daily moving average convergence/divergence is overlaid on a weekly histogram of the oscillator, and has crossed above its center line on both timeframes. Chaikin money flow is well into positive territory, reflecting improving buying interest and confirming the positive price momentum indications.

The cup and handle pattern price objective is measured by taking the dollar amount of the “depth” of the cup and adding it to the rim line. It targets a move back up to the August highs.