“Mad Money” host Jim Cramer took to the charts with technician Carley Garner to determine why gold can hold its own against bitcoin.

Cramer: Why bitcoin is not replacing gold anytime soon from CNBC.

With a Bank of America Merrill Lynch survey casting bitcoin as the world’s most crowded investment, CNBC’s Jim Cramer weighed the idea of the cryptocurrency replacing gold.

“Has bitcoin started to replace gold as a repository of value, a place for rich people to hide their money when they get worried about inflation or government confiscation?” the “Mad Money” host wondered. “With the recent decline in the precious metal and the incredible paraboa that is the run in bitcoin, this idea keeps popping up.”

To determine whether the idea has merit, Cramer called on technician Carley Garner, the co-founder of DeCarley Trading and the author of Higher Probability Commodity Trading.

“Long story short, bitcoin’s not going to replace gold anytime soon, and I’d say that even if it hadn’t started pulling back over the past couple of days,” Cramer said.

Garner began by saying that bitcoin was supposed to be an experimental currency that allowed people to anonymously move money around the internet, not an investment vehicle.

The digital currency also isn’t backed by anything physical. If the internet shut down tomorrow, bitcoin owners wouldn’t be able to access their assets. A bitcoin owner being hacked or forgetting his password would garner the same result.

“Put it all together and Garner believes bitcoin’s astronomical value is the result of perception, not reality,” the “Mad Money” host said.

Gold, on the other hand, has some inherent value. Even though most of its value is symbolic, the precious, non-corrosive metal can still be used to make jewelry, conduct electricity or cap teeth.

Plus, the $2.4 trillion global gold market is very deep. Millions of investors own a piece of the pie in the form of bullions, jewelry, coins or other investments. In comparison, the entire digital currency market is worth $600 billion, with bitcoin only accounting for about half.

As such, Garner was skeptical that gold is falling because bitcoin is soaring. Gold pulled back below $1,250 an ounce four times this year and managed to bounce back, and no one blamed the declines on bitcoin, she said.

Moreover, gold’s charts suggest its value could go higher. Historically, gold tends to decline in early December, then buyers come in and drive the precious metal to rally until March. 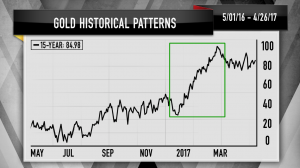 “If that seasonal pattern holds up, Garner says you should be buying the dips in gold, not freaking out about its relationship to cryptocurrencies,” Cramer said.

Better yet, the Commodity Futures Trading Commission’s Commitments of Traders Report in gold’s weekly chart showed Garner that gold could be at or near a bottom.

“Garner’s noticed that when the net long position of large gold speculators falls to around 100,000 contracts, the precious metal has a tendency to find a bottom,” Cramer explained. “At the moment, it’s almost at 100,000, which means we could have a little more downside, or maybe gold already bottomed last week.”

Covering all her bases, Garner also looked at the weekly chart of the dollar index, which tracks the U.S. dollar against a group of foreign currencies. 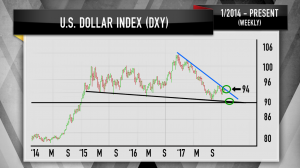 When the dollar goes down, gold goes up, and the dollar is on a downtrend, which means gold could have more strength ahead.

Finally, Garner noted that the stochastic oscillator, which measures when assets are overbought or oversold, is signaling oversold readings in gold’s weekly chart. 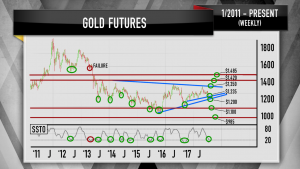 “Of the last 10 occasions when this oscillator has shown oversold readings — meaning gold’s due for a bounce — nine of them have ended up giving you a nice rally,” Cramer said.

Garner also noticed two solid floors of support for gold at $1,235 and $1,200. All in all, she expects the precious metal to run to $1,350 before finding any kind of ceiling of resistance, with the possibility for gold to reach the $1,400s if some global calamity occurs.

“Bottom line? Look, I know the jaw-dropping run in bitcoin has been very exciting,” Cramer said. “But gold is not being supplanted by bitcoin as the go-to alternative to actual currency, and the charts, as interpreted by Carley Garner, suggest that gold might be ready to make a comeback. And while I won’t discourage anyone from buying bitcoin — just know the risks, know your limitations — I’m with Carley when it comes to the precious metal, not the precious keystroke.”