Shares of Ulta Beauty (ULTA) are attempting to form a base after their abrupt reversal in trend in June and the nearly 40% decline that followed.

They ultimately found support above the $190 level in November and then began to reverse direction, moving back up to the $230 level. The price action over the last five months now looks like a rudimentary inverse head and shoulders pattern on the daily chart. A inverse H&S pattern is considered a fairly reliable bullish reversal formation. 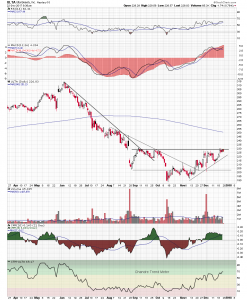 The daily moving average convergence/divergence indicator is overlaid on a weekly histogram of the oscillator and is tracking higher and above its center line on both timeframes. This reflects positive short term trend direction and momentum.

Chaikin money flow moved into positive territory this month suggesting an increase in buyer interest. At the bottom of the chart is the Chandre Trend Meter, which assigns a number to a trend strength reading, measured by using six different moving averages on multiple timeframes. It is tracking higher and above its center line, another indication of improving trend strength.

Several upper candle closes above neckline resistance in the $230 area could signal an intermediate term reversal in the direction of the stock price.