An analysis of the 30 minute Bitcoin chart gives some insight into the recent “flash crash” and the support and resistance levels defined by the price action. 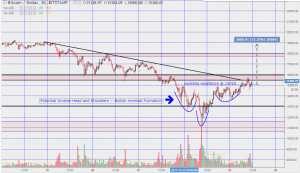 But it did not hold and on the evening of 12/21 (UTC-5) momentum began accelerating to the downside.

It wasn’t until the next morning that price stabilized in the 11000 area which, again, was prior support, this time on the daily time frame. Bitcoin buyers came in and the price started to move higher, back over 13000 and up to the 15000 area, which happens to be a 50% Fibonacci retracement level of the overall five day range.

The basing process of the last two days has formed an inverse head and shoulders pattern on the 30 minute chart, with neckline resistance in the 15000 area. This pattern is a fairly reliable bullish reversal pattern often seen at important lows in price. Confirmation of the pattern requires several closes above the neckline and eventually a resumption of the former uptrend.

The inverse head and shoulders pattern can be used to project a potential upside price target. In this case, by taking the depth of the pattern (distance from the neckline to the bottom of the head) and adding that number to the neckline, the measured move higher targets a price objective in the 19000 area, or a 25% move from its current level. Again, confirmation of the breakout is required and the measured move is not a guarantee. This is trading after all, and trading of a very volatile instrument.

A 25% move in Bitcoin is not headline grabbing but it would require several important levels of resistance to be broken and help to reestablish the uptrend.