Two days ago an inverse head and shoulders pattern formed on the 30 minute Bitcoin chart, and it looked like a base had formed. The bounce that followed took out the H&S neckline, but instead of gaining momentum and continuing higher, it met solid resistance in the 15500 area. 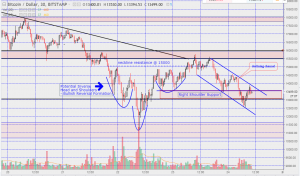 Subsequently, Bitcoin pulled back to the right shoulder support area. There was a brief bounce off the 13500 level, but that move faded and a low that was lower than the H&S right shoulder was made early this morning.

A second small bounce followed the new low but it is currently being contained by the downtrend line drawn off today’s highs. The resulting pattern of failed new highs and lower lows looks like a classic downside stair step pattern.

This pattern often forms a declining channel pattern. The pattern on the 30 minute Bitcoin chart will not be broken until its upper channel downtrend line is taken out, and there is another basing process. Recapturing the 15500 to 16000 resistance zone is key to a recovery.

Unfortunately, for Bitcoin bulls the momentum is to the downside and several solid opportunities to reverse direction have been squandered. But it is Bitcoin and previous charting patterns can be quickly negated.