The current price action on the weekly chart of cybersecurity company NetScout Systems (NTCT), is similar to the price action that preceded the 2016 rally in the stock. 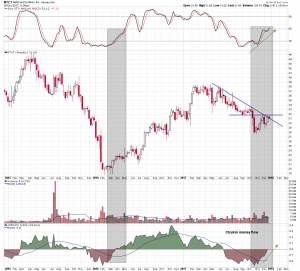 There has been some basing action following a long decline, the stochastic oscillator has crossed out of an oversold condition, and Chaikin money flow has been moving steadily higher and is crossing into positive territory.

These are the preliminary indications that were in place in early 2016 before the stock nearly doubled in price by early 2017.

On the daily time frame the basing price action over the last several months has formed a cup and handle pattern. Rim line resistance at $32 is also the 38% Fibonacci retracement level of the 2017 pullback range. 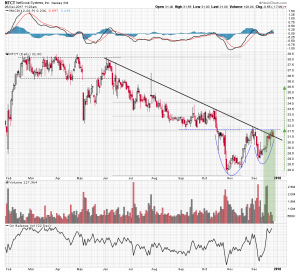 Stochastics are back above their centerline, and the recent strength in the stock has been reinforced by strong volume.

A bullish breakout projects a pattern price objective measured by taking the depth of the “cup” and adding it to the rim line. It targets the $35.50 area. There is a 14% short interest in the stock and some covering of those positions could initiate more buying interest.