The path of volatility over the last two years, as represented by the iPath S&P 500 Short-Term Futures ETN, has been from the upper left hand corner of the chart to the lowest point on the lower right.

Macroeconomic, social and political, national and global, and any other ancillary market concerns have been factored out of investor thinking, and fear has simply evaporated. It may be, however, investors are now coming to the realization that the market is not totally immune to an exogenous event. 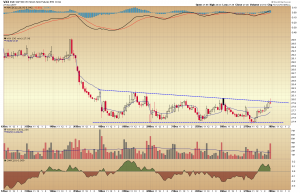 The action on the 30 minute chart over the last seven sessions shows the VXX trading in a narrow triangle pattern, below a declining resistance line and above horizontal support in the $27.40 area. It is currently retesting the triangle downtrend line and moving average convergence/divergence has made a bullish crossover and is above its centerline for the first time since the beginning of the month. Chaikin money flow has moved into positive territory suggesting some new buying interest and supporting the recent positive price action. 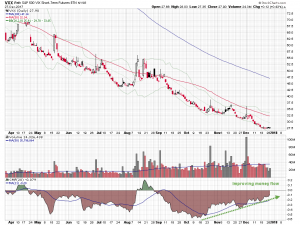 A breakout above triangle resistance on the 30 minute intraday timeframe could be a catalyst for the improvement on longer time frames. One reason is a short-term floor may be in place and another has been the steady rise in positive money flow on the daily chart.

At some point, investors will start to factor risk into this market, and the Volatility Index will reverse trend and start to rise. It is impossible to say with any certainty when that will happen, but when it does it will probably be a process that, in its early stages, looks similar to the one currently in progress on the charts.