Here is a year-to-date daily chart of the S&P 500 index. It is a thing of beauty.

This month, as in past periods, there are technical indications that the S&P 500 may be ready for a brief pause. This should not be considered bearish for the index, but rather as an opportunity to consolidate recent gains and prepare for the next leg higher. 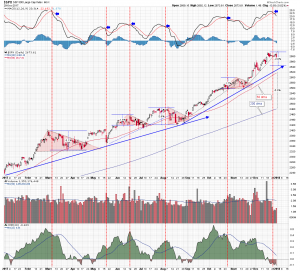 The 50 day moving average is currently about 5.3% higher than the 200 day average, which is the widest differential in over a year. This suggests the potential for some level of mean reversion.

Moving average convergence/divergence (MacD) is making a bearish crossover and Chaikin money flow, a measure of buying interest, is in negative territory. There have been similar coordinated periods of waning momentum and declining money flow on this chart. In every case except the one in May, they have been accompanied by triangular price contractions, ending with breakouts to the upside and resumption of the primary trend.

This week an interior up trend line was broken to the downside and, in Friday’s session the index closed on the low of the day. Volume, however, was very light during the holiday week.

The technical indications are, once again, pointing towards another period of consolidation before the S&P continues higher. The question is: where will the index find support and build its next base? That’s not clear yet but the previous pullbacks have not been very deep on a percentage basis.

A 2% pullback this time would retest the uptrend line drawn off the August and November lows, which would be a good place for a bounce.