I’m not sure what happened to the market on Friday particularly in the final 30 minutes of trading. A large number of stocks finished right on their lows, and many across a variety of sectors just below their 50 day moving averages.

It was, of course, the final day of trading in a very profitable year and volume was light, but it was curious. It will likely be an interesting start to the New Year next week.

One stock worth watching next week is NVIDIA (NVDA), whose shares were powered higher this year by the company’s gaming graphics chips. Cryptocurrency miners also use these graphics cards to power their mining operations.

Year-to-date, NIVIDIA has outperformed the S&P Technology Select Sector SPDR ETF (XLK) by over 35%, but it is under-performing the fund by 2.8% this month. Shares of the semiconductor manufacturer dropped 16% in the last two session of November and the first two sessions of December, breaking through a six month uptrend line and the 50 day moving average. 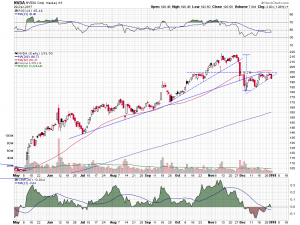 They have since made a small series of higher lows but under horizontal resistance in the $200 area. That resistance level has not even been penetrated on an intra-day basis. This lack of momentum has taken the relative strength index (RSI) lower and below its center line, and the Chaikin money flow indicator suggests that the stock has been under distribution.

In Friday’s session shares closed on their low forming a large bearish dark candle that has cracked the short-term uptrend line drawn off the higher lows this month. The pattern on the daily chart of the early month drop in price, followed by consolidation resembles a bear flag, and further downside price action would confirm a pattern breakdown. The measured move projected by the pattern targets a return to the current area of the rising 200 day moving average.

NVIDIA has been a powerhouse stock and the primary trend is still higher, so a quick reversal and a break back above the $200 level, is also a distinct possibility next week. The potential for a new bull phase would be quickly bought and a new high for the stock would likely follow.

The takeaway here is to be patient and let next week’s price action dictate the trade.