Over the last two months a cup and handle-like pattern has been forming on the Walgreens Boots Alliance daily chart. Rim line resistance is located in the $73 area. That resistance is currently being retested and the technical indications are suggesting that, ultimately, the stock will break out.

The October decline and rebound in Walgreens’ shares was followed by horizontal consolidation between $69 support and the $73 resistance level. This combined price action formed the cup and handle pattern.

On this chart, daily moving average convergence/divergence is overlaid on a weekly histogram of the oscillator, and has crossed above its center line on both timeframes. Chaikin money flow is well into positive territory, reflecting improving buying interest and confirming the positive price momentum indications.

The cup and handle pattern price objective is measured by taking the dollar amount of the “depth” of the cup and adding it to the rim line. It targets a move back up to the August highs.

The December leg of the Bitcoin rally continues, but just in case there is a disturbance in the force, here are some support levels to watch on the daily and 15 minute charts.

Bitcoin prices on the daily timeframe, as tracked on Bitstamp, formed a large bullish candle in trading on Friday. It was followed by a spinning top candle, one with a narrow real body or opening and closing range, situated in the center of its overall range. It is generally considered a reflection of trader indecision.

If the market needs to absorb recent gains and there is a pullback period, there is not much in the way of support on the daily chart until the 17,350 level to the 16,500 level.

On the 15 minute Bitcoin chart, there is secondary support between 18,600 and 18,475 (which is being breeched as I type this). The large bullish candle that formed on Friday offers little in the way of interior support levels and the next area down, is between the 17,900 level and the 17,825 level.

Below that, is the wide daily support zone.

Remember, in trading, preserving capital is the prime directive.

(Charts are from www.tradingview.com)

Coinbase’s president reveals what’s next in the cryptocurrency craze from CNBC.

CNBC’s “Fast Money” host, Melessia Lee interviews Asiff Hirji, the President and COO of Coinbase, about the future of cryptocurrency.

Shares of Alibaba Group Holdings (BABA) have been advancing over the last four months in a well-defined pattern of higher highs and higher lows. The range of this pattern has been expanding, in a similar way to a widening top or megaphone pattern, but without the lower lows.

At the beginning of December the uptrend or support line was breached. It was quickly recaptured but the flat 50 day moving average situated just above the rising trendline, has contained the bounce and halted a move to return to the upper end of the pattern and make a new higher high.

A large dark candle formed in Tuesday’s session and at this point in trading today, a small gravestone doji is in place. The relative strength index has been tracking lower and below its centerline for a month, and Chaikin money flow is in negative territory.

It appears the integrity of the uptrend line is in jeopardy and a breakdown projects a measured move which would retest the 200 day moving average.

A continuing low interest rate environment has been the catalyst for the rally in high-yield corporate bond prices over the last two years. The iShares iBoxx $ High Yield Corporate Bond ETF is up over 28% from its 2016 low to its October 2017 high. This is the result of investors who are seeking yield being forced to expand their risk tolerance, and buy high yield corporate and junk bonds. But that strategy will shift when the spread between risk and yield narrows and they move back into US treasuries. 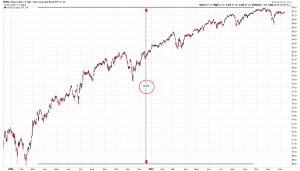 It is expected the Federal Reserve will raise interest rates by 0.25% this week, and many Fed watchers believe there will be further rate increases in 2018. What is less certain is the timing and magnitude of any future rate increases. The best gauge on trajectory and magnitude of short-term US interest rates may be the contrarian indication of high-yield corporate bond prices.

For the last several weeks it has been moving in a narrow sideways channel below the same level of former neckline resistance and above $82.20 support. The integrity of these channel boundaries will likely determine the intermediate term direction the HYG fund, and inversely the direction of short-term interest rates.

It is one chart to watch after the Federal Reserve news.

The steady move higher in the iShares Emerging Markets ETF (EEM) this year is faltering. A regular series of higher highs and higher lows ended this month, when the EEM closed below its October low last week.

The fund was able to bounce back above that low and briefly recapture a four month uptrend line, but that advance was thwarted by resistance at the 50 day moving average. Today it is trading back below the trend line.

Chaikin money flow has been declining going into the most recent high, and now is below its centerline. It suggests that the EEM is under distribution and continued price declines will likely accelerate the selling.

Here are performance charts of the S&P Select Sector SPDR funds, over six, three, and one month periods.

The financial sector (XLF) and technology (XLK) have led the group over the last six months.

But technology began fading three months ago, relative to the financials.

This is the one month performance chart and the financial sector is the clear leader in the group, while technology is a laggard.

The Federal Reserve is expected to raise interest rates later this week. That is obviously what has fueled the rise in financial stocks. What has depressed the technology sector is not as clear.

On Monday last week, Facebook (FB) shares opened sharply lower, taking out their 50 day moving average and forming a large dark candle on the daily chart. The next day they attempted to rebound but couldn’t hold their highs, and faded back to mid-range, forming a high-wick candle. On Wednesday, they were able to recover and closed near the high of the day and back above the 50 day average.

The three-day price action last week looks like a rudimentary morningstar candle pattern. A morningstar pattern is a bullish reversal pattern that represents a transition from bearishness-to-bullishness.

The positive momentum in Facebook lasted another day but then on Friday that week, a large bearish dark cloud cover candle formed. It reflects a failure to hold opening highs and closes back down into the previous day’s range.

The inference could be that traders who were holding long positions through the drop two weeks ago and then the morningstar reversal last week, were happy to see the stock recover but not confident it would continue higher, and they took profits.

This week the overall daily range of trading in Facebook is lower and momentum is weaker. On Monday a small doji candle formed with the real body, or opening and closing range, positioned near the low of the session. Not a confident candle.

At this point in today’s session, the low was just above an important intersection of support delineated by the horizontal trend line drawn off the October high and lows in November, and the 50 day moving average.

A break below this level would potentially retest the morningstar low and if that were to occur there would no doubt, be some speculation that a triple top was in place on the Facebook chart.

The Russell 2000 Small-Cap Index (RUT) has been all over the map in the last two sessions, moving in a 4% range and forming two bearish topping candles. These particular candles are reverse images of each other, and this confusing price action could send traders heading for the exits.

In the first two hours of trading on Friday the Russell dropped sharply, only to find its legs and reverse direction, closing about where it had opened. This formed a large “hanging man” candle, just above the 50 day moving average. Schizophrenic

A hanging man candle has a long lower shadow or tail, and a narrow opening and closing range situated near the high of the day. It is interpreted as a sign that buyers are losing control and while they managed a late-day rally, the ability to sustain upside momentum is in question.

On Monday, the index gapped open but any of Friday’s residual upside momentum was spent in the first ten minutes of trading. The Russell spent the remainder of the session moving lower. It ultimately closed the gap and finished near the low of day.

Monday’s action formed a large “gravestone” doji or a candle with a long upper shadow or wick, and a narrow opening and closing range situated near the low of the day. A gravestone doji often forms at market tops.

The schizophrenic behavior of the Russell small-cap index over the last two days suggests that traders are unsure of the sustainability of the most recent leg up in the small-cap stocks. If they begin to take profits momentum will shift and could easily accelerate to the downside.