Shares of McDonalds are up 50% over the last year. There are sound fundamental reasons for a rise in the stock price, from wider company profit margins to the change in the California marijuana laws. But McDonalds strong move in is in contradiction to millennial eating habits and the general public’s shift towards healthier lifestyle choices.

Pullbacks and consolidations, of course, are a part of the trending process and it looks like McDonalds’ shares are preparing for a pause in their progression higher. 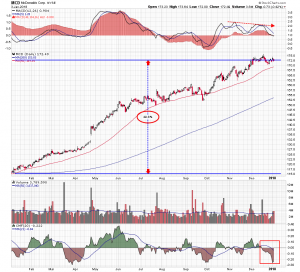 The first daily chart shows the steady advance in the stock price over the last 52 weeks. It has tracked from the lower left of the chart to the upper right, just above its rising 50 day moving average.

This month the trajectory of the rise has leveled off and Chaikin money flow has dropped into negative territory. Daily moving average convergence/divergence is overlaid on a weekly histogram of the momentum oscillator, and has made a bearish crossover on both timeframes. There has been this combination of moderating momentum and negative money flow in the past, and each time it has only signaled a small percentage pullback or short period of consolidation. 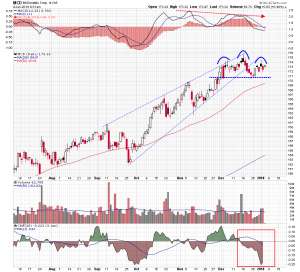 Taking a closer look at this chart, we can see that shares of McDonalds have been moving higher in a rising wedge or triangle pattern that began forming last October. The sideways consolidation, while still a lateral move, has broken the pattern uptrend line.

Also, this month a rudimentary head and shoulders pattern has formed on the daily chart. There have been similarly constructed consolidation formations as the stock has rallied higher, so it is way too early to suggest a top.

It simply looks like McDonalds’ shares are ready to consolidate gains and posiibly pullback modestly in the process. Watch the $171 neckline support level and the strength of the 50 day moving average, should it be tested.