Apple (AAPL) is having trouble breaking above the $176 level and as a result, it is the worst performer in the extended FAANG group (Facebook, Amazon, Apple, Netflix, and Alphabet) over the last thirty days.

While the other stocks in the acronym have moved above their November or December highs this month, Apple has remained locked in a horizontal channel pattern for the last two months. 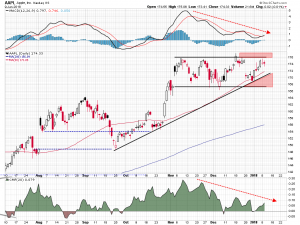 Over the last two weeks, they moved higher along with their rising 50 day moving average, returning to the upper end of the sideways channel and closing a small downside gap.

While this is positive price action, the moving average convergence/divergence momentum oscillator has been in bearish divergence over the two month consolidation period. The Chaikin money flow indicator has been declining, confirming the underlying weakness in the stock price and suggesting that buyin interest is also waning.

The integrity of the very clearly defined zones of support and resistance (red areas on the chart) should determine the intermediate term direction of Apple stock.