Most economists polled by the Wall Street Journal expect that interest rates are headed higher this year and into next year.

The economists expected the central bank to raise rates three times this year and twice in 2019, which is consistent with the Federal Reserve’s own projections.

The ProShares UltraShort 7-10 Year Treasury ETF (PST) seeks daily investment results that correspond to two times the inverse of the daily performance of the U.S. Treasury 7-10 Year Bond Index. Unlike the bonds themselves, it goes up when short term rates move higher. 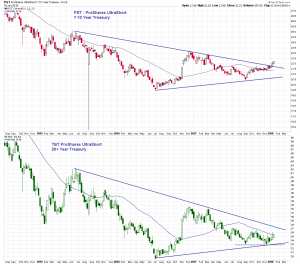 The weekly chart shows the fund breaking above the two year downtrend line of a rising triangle consolidation pattern.

Included on the chart is the the ProShares UltraShort 20+ Year Treasury ETF (TBT), and its results correspond to two times the inverse of the daily performance of the U.S. Treasury 20+ Year Bond Index. It goes up when long term rates are moving higher.

It looks like the TBT has formed a floor in the $33 area and is preparing to break above its long term downtrend line.

A transition is underway in the long term direction of interest rates, and that could be a drag on stock prices. These inverse funds offer one way to profit from a new direction in Federal Reserve policy.