A rarely seen bearish reversal pattern formed on the daily C.H. Robinson Worldwide (CHRW) chart one day before the company reports earnings. On Monday the third in a series of three consecutive “doji” candles appeared creating an unusual “tri-star” pattern. A doji is a candle with a very narrow opening and closing range and usually a large upper wick or shadow, and it represents investor indecision. 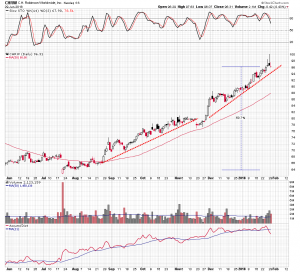 On the C.H. Robinson chart three consecutive dojis formed with the second in the series higher than the first and the third lower than the second. This is a tri-star pattern and it is meaningful because as Investopedia says, ” Having a series of three consecutive doji candles is extremely rare, but when it is discovered, the severe market indecision generally leads to a sharp reversal of the given trend.”

Shares of C.H. Robinson have advanced higher since their August 2017 low in two distinct stages and are up 50% in that time. The stochastic oscillator reading reflects the overbought condition of the stock and it is turning lower. Positive money flow is waning and the accumulation/distribution line has crossed below its 21 period signal average.

It is impossible to say if a top is in place on the C.H. Robinson chart or how the stock will react to the earnings report when it is released after the close on Tuesday. It is possible to say that a very rare bearish reversal candle pattern has formed on a stock chart that is severely overbought and under short-term selling pressure.