Shake Shack (SHAK) shares have had an incredible run since making a low in September last year. They were up as much as 56% earlier this month, but after making a high in the $47.00 area, they pulled back and have been trading above support at the $42.50 level. 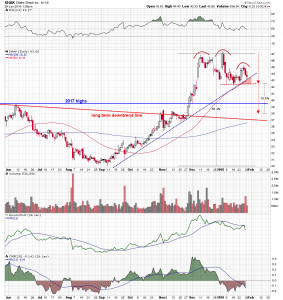 The price action in Shake Shack over the last two months has formed a rudimentary head and shoulders top. Neckline resistance is at $42.50 and that level forms the base of a triangular area of support. The top of the triangle is the trend line on the daily chart that delineates the four month rally, which is currently being reinforced by the rising 50 day moving average.

The relative strength index is positioned on its center line, reflecting a loss in upside price momentum. While the accumulation/distribution line has crossed under its 21 period signal average, and Chaikin money flow has moved into negative territory. These money flow indications are signs of selling pressure.

Shake Shack has been pulling back off its right shoulder in the last three sessions. If the stock were to break the $42.50 neckline level, the head and shoulders pattern measured move suggests a 10% downside target around the $38.00 level.