Wynn opened lower on Tuesday and despite pressure from a deep broad market decline, it was able to stabilize and quickly reverse direction. The stock move back up through its 50 day moving average and closed near its high of day. It reversed nearly 7% from its opening low to its closing high and was up overall 4.8% on the day. 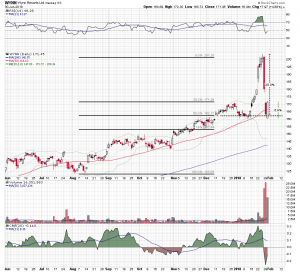 The technical price momentum and money flow indicators have been whipsawed as they factored the volatile movement of the stock over the last three sessions. Pure price action will dictate the direction of the stock for at least a short-term.

At this point in time, Wynn shares need to hold above the $162 retracement level, which was also support earlier this month. This week there could be some upside follow-through that closes the downside gap, but the most constructive thing that could happen right now would be for the stock to begin forming a base. This base could then act as a stable platform from which Wynn shares could attempt to get back to trend.