At the beginning of the year it looked like Disney (DIS) shares were advancing towards a retest of their 2017 high, but now it looks like they will come up about a buck short.

Disney’s shares had pulled back to the $110 level where they saw some consolidation. During this time the momentum indicators began moving lower in bearish divergence to the stock price. Today the $110-level was breached in early going in the session. 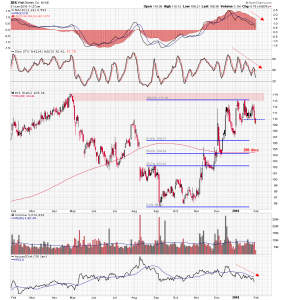 Here’s an update on the technical conditions. The daily moving average convergence/divergence indicator, which is overlaid with a weekly histogram of oscillator on this chart, is moving lower on both time frames. This reflects loss in in price momentum and short term trend direction.

Stochastics has made a series of quick lower highs and lower lows and now is below its center line. The accumulation/distribution line moved below its 21 period signal average in December and has continued to track below it and lower.

The price action and the technical indications imply a pullback, likely triggered by a break below the $110 support level. How deep a decline is speculation but the Fibonacci retracement levels do provide some context.
A move down to the 50% level in the $104.50 area would coincide with a reversion to the 200 day moving average.

The $110 level has been broken in trading today, but it is still early in the session. Place disciplined stops if you’re short and we’ll see how this breakdown plays out.