There is a particular importance to the appearance of the weekly candle.

It is “blended” candle or an amalgam of price action over the week, and as such, it contains more information.

A candle reversal pattern on the weekly chart is more significant than a similar pattern on the daily chart because it implies a change in the intermediate term trend, as opposed to a short term change. 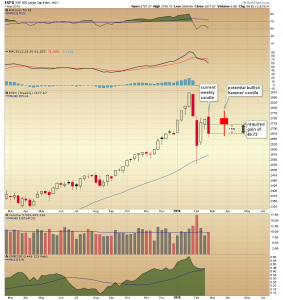 The current weekly candle will not be fully matured until the close of trading today. If the S&P index were to close at the same level it closed at on Thursday, it would form a large dark bearish engulfing marubozu candle.

A marubozu candle is a large dark candle which opens opened near its high and closes near its low. In this hypothetical example, its range would encompass the entire range of the previous week’s candle. This would qualify it as bearish engulfing candle which could a signal an end to the bounce off the February low and a reversal of the intermediate term trend.

So what would be required for this week’s S&P 500 index candle to turn technically positive?

One option would be for a weekly hammer candle to form. The hammer candle has an opening and closing range in the top half of its overall range, and a long tail or lower shadow. It is considered a bullish reversal candle and sometimes marks a “hammer bottom.”

In order to form a rudimentary hammer candle at this point in the week the S&P 500 index would have to return to its weekly mid-range, which is back near 2725.

This would require a 46.73 point gain in the Friday session or about a 1.6% move above the Thursday close. It would tighten the range between this week’s open and this week’s close, above the candle center line, and form a rudimentary weekly hammer candle.

If the index could accomplish this amazing feat of strength, it would change the complexion of the weekly chart and suggest that the bounce off the February low (also a hammer candle) has more room to run.