But it was more than a one day event. The price momentum and money flow indicators have been sending bullish signals for some time. 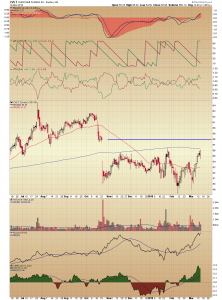 Daily moving average convergence/divergence is overlaid on a weekly histogram of the oscillator and it has made bullish crossovers on both time frames. The aroon indicator and the vortex indicator are each used to identify shifts in trend direction. Aroon measures new highs relative to time and the vortex indicator measure new highs relative to price. Both indicators have made bullish crossovers.

Over the last month the money flow indicators have soared above their signal averages. This is a reflection of positive investor sentiment.

Tuesday’s hammer candle formed just below the 200 day moving average which has been acting as resistance for the last four months. This barrier has prevented the October 2017 gap from being filled.

CommVault’s strong performance against the back drop of a 248 point drop in the Dow, however, suggests that further resistance will be futile.