The Intel (INTC) chart looks like it is rolling over.

A high wick shooting star candle formed last Tuesday which was followed on Thursday by a large bearish dark candle. The stochastic oscillator has made a bearish crossover and has moved below its overbought border, and the accumulation/distribution line is pointed lower. 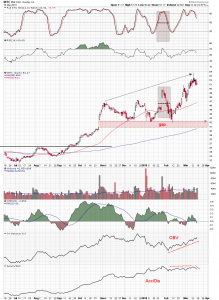 Intel has been making a series of higher highs for the last four months. That is a good thing but the previous three highs have all been followed by lows that retest the $42 level. That is not a good thing. The pattern looks like some kind of modified megaphone top.

The depth of the pullbacks that have followed the highs has been widening. If there were to be another similar pullback from Intel’s current level it would constitute a 16% decline from where the stock closed last Friday. The $42 level is the upper end of a gap that formed in late October last year. Gaps have magnetic properties.

From time to time, I want to include in these postings, some explanation about the technical indicators I use. Specifically, how they are constructed and what they are telling us. Too often, I see people using charts that contain indicators that use basically the same information to support their technical view on the direction of a stock. This is called multicollinearity or using redundant data as confirmation. It is not confirmation at all and needs to be avoided.

The stochastic oscillator is telling us the position of the price of a stock relative to its overall range over a certain period. The default period is 14 days. I’ve highlighted a 14 day period on the chart in late January and noted the mid-range with a dashed line. If you compare the price of Intel to the reading on the stochastic oscillator, you can see the relationship very clearly.

So, the stochastics oscillator is rolling over or headed from a position near its recent high range to a lower position in that range.

The on balance volume indicator had been moving higher, but the accumulation/distribution line has been flat to, more recently, lower. They both measure the direction in the flow of money, either to the buy or sell side, but the difference in the readings is again, how they are constructed.

Accumulation/distribution is a little more sophisticated. It measures an up volume day by where the stock price closed relative to its overall range. In other words, if the stock closed in the upper half of its overall range it calculates that as buying volume, and if it closed in its lower range that is considered to be selling pressure.

On balance volume and accumulation/distribution generally trend in the same direction, but divergences between the two can signal a change in the trend.

The price action and the technical indicators, as I interrupt them are suggesting that Intel is due for a pullback. The depth of the potential retracement is unclear but it has the potential to be considerable.

Long holders of Intel should be cautious and tighten stop loss levels.